The War diaries of the 4th Infantry Brigade, 2nd Canadians indicated troop movements away from the Somme at the beginning of October 1916.  Corporal Noel Bramwell Hall and his fellow infantry in the 19th Battalion had to take a long curved walk to their destination across fields, farms and through villages so they did not pass too close to the frontline.

They set off on 5th October from Bouzincourt and walked to Warloy-Baillon via Senlis-le-Sec. They had a couple of nights at Warloy to rest.

On 7th October their billet was La Vicogne via Contay, Herissart and Val de Maison.

Looking across the fields towards la Vicogne 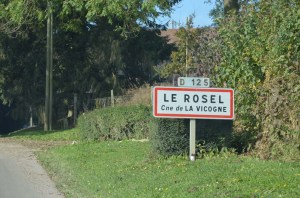 Their 8th October destination was Bonneville via Val Heureux (Vert-Galand farm).  It seems they had a bit more rest at Bonneville of 3 nights in one place without being fired upon. 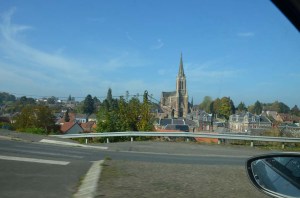 Beauval (one of the other Canadian Battalions came through this town, not far from Occoches)

On 13th October they left the Houvin-Houvigneul area (it seems some of the Brigade was there rather than nearby Sibiville) – the march table for their destination listed several villages including Houvlin, Magnicourt-en-Comte, Monchy Breton, Orlencourt, Marquay and Bailleul-aux-Cornailles.

On 14th October they moved to Bruay-la-Buissiere, Haillicourt and Ruitz near to Bethune and the frontline.

16th October was the day the 4th Brigade marched to the Barlin-Hersin area in preparation for the frontline again.

During the afternoon of 26 October 2016 we roughly followed their route from the Somme to get a sense of the landscape and places they would have seen on their journey.  It was mostly farmland, villages and towns until we approached Bruay-la-Buissiere, though even on the motorways leading to Lieven, Lens and Loos-in-Gohelle where Noel is buried the colour of the autumnal trees lining the route were spectacular.

So although the landscape had become industrial and built up, there was enough nature to retain some beauty.

The British frontline the 2nd Canadians had been sent to relieve was divided into three Brigade sections: Souchez on the right (south), Angrez in the centre and Calonne on the left (north) – near Bully-Grenay (where one Battalion was based in reserve).  The 4th Brigade was assigned to the Calonne section which was being held by the 111th Brigade and relieved them on the 17th October.

The map shows the British front line in Spring that year.

The Lens and Bethune area was a mining region and therefore of great value strategically.  Some of the 4th Brigade was called upon to help with some tunnelling for military purposes while most of the others manned the defences and frontline.

The War Diary intelligence summary sheet for 26th October 1916 shows that the weather was fair, the gas alert was relaxed and the Duke of Devonshire visited the 2nd Canadians that day. It also stated: Casualties O.R. 1 killed, 1 wounded.  O.R. means Ordnance Rating.  Noel.

On the Library and Archives of Canada website I found the index card showing the circumstances of Noel’s death:

He was instantly killed by the premature explosion of a shell in the gun he was serving, during operations in the vicinity of Calonne.

It seems that he died somewhere just south of Grenay as the cemetery where he was originally buried was between Grenay and Lievin and they would not have moved him far.  He was less than 2 months short of his 25th birthday.

Also online I found a very poignant listing in the Newcastle Daily Journal, Friday November 10, 1916 which showed not only Noel’s death notice (under the military deaths – Roll of Honour) but that of his grandmother Ann Eliza Hall who died on 9 November exactly 2 weeks after Noel’s death, at the age of 79.

I can imagine that Ann Eliza was probably already unwell and that the appalling news of her beloved grandson’s death broke her heart.  Only 2 years previously her eldest daughter Marian had died and Noel’s father (her son) was also dead.

In 1925 Noel’s aunt Rosa Beatrice Hall, still living at the Manor House in Shincliffe, received a letter from the Imperial War Graves Commission which explained that Noel’s body had been moved to the Loos British Cemetery.

The tone of the letter is sensitive even though it would have been sent to many families (the type is different for the unique information about individual soldiers but the letter was still signed personally).

In 2008 we found his grave so it wasn’t difficult to find it again in the neatly laid out cemetery.  Once again for our visit to Noel the weather was beautiful, with a clear blue sky, the fog of the Somme area left behind. 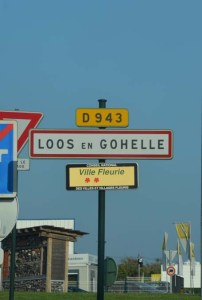 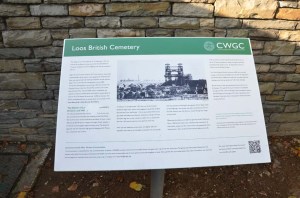 Information about the battle of Loos

We had brought some English roses from our garden to place on Noel’s grave – the lovely yellow scented ‘Summertime’ which climbs around an archway in our garden, the two last buds of the gorgeous scented deep purple ‘Young Lycidas’, some sprays of the prolific red Olympic flame and an unidentified orange coloured hybrid tea rose from our front garden.  Noel has a known grave with his name on it.  So many of the WWI dead have no known grave or were not identified, therefore it seemed fitting to bring him an unidentified rose to acknowledge his many lost comrades. 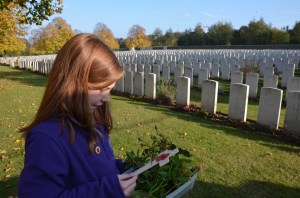 Carrying the roses and remembrance cross to Noel’s grave

Noel’s grave when we arrived

The Remembrance cross and poppy for Noel 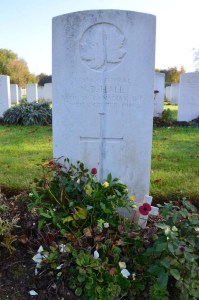 Roses from England for Noel 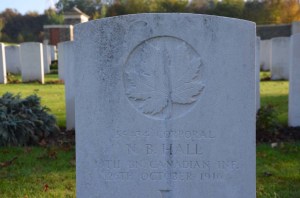 The inscription about Noel Bramwell Hall on his headstone 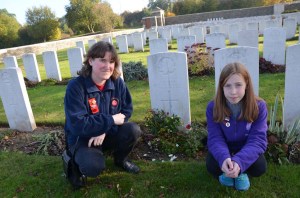 Commemorating Noel on the 100th anniversary of his death 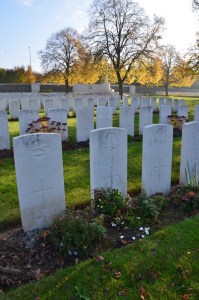 Noel’s grave in the foreground

Commemorating Noel on the 100th anniversary of his death

Row B in section 18 at Loos British Cemetery 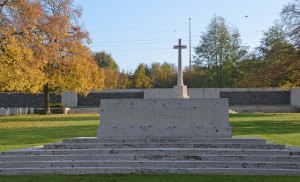 The memorial stone and cross in Loos British Cemetery

The Maple trees in the cemetery had lost a lot of their leaves but still looked flaming in the sunshine.  We signed the Visitors Book before we left to return to England.

Our entry in the Visitors Book at Loos British Cemetery

It was an immense privilege to be able to retrace some of Noel’s steps on this 2 day trip to France and learn something of what those soldiers experienced in that terrible drawn out fight for territory which wasted so many lives.

British line in Artois in the spring of 1916 after the relief of the French army south of Loos. Campaign and Battle Maps, The Long, Long Trail – the British Army in the Great War http://www.1914-1918.net/maps.htm